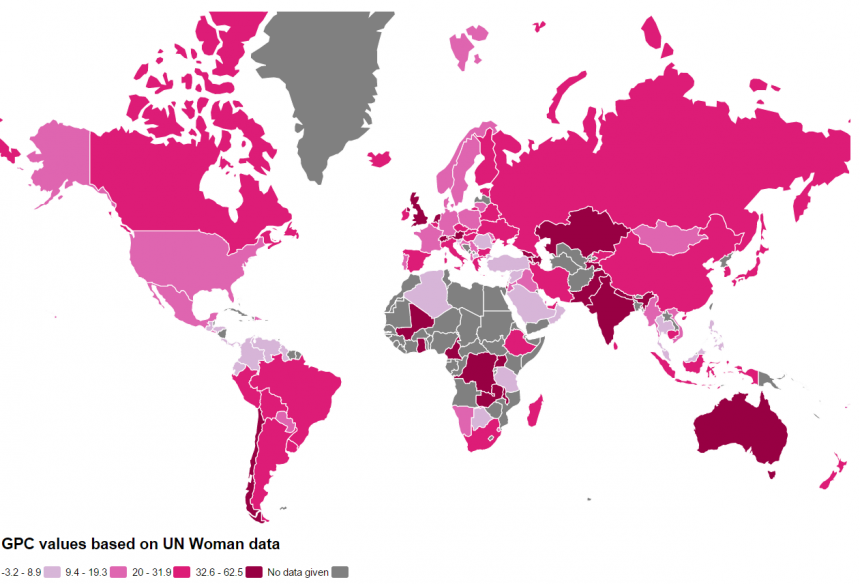 Most people know what they earn and what their friends earn. I often experience the gender gap in conversations with my friends and, quite frankly, it never fails to shock me. I asked myself how others are dealing with the phenomenon. Is gender gap only existing in my country or is it something global?

To find out, I did some research and data science. For data analysis, I used the data provided by the UN Woman (http://progress.unwomen.org/en/2015/download/index.html#report). In this report, they provide gender pay gap data for almost every country in the world =119. The ordinal number describes the difference between the average income between men and women by country.

To provide insight about the data, I use some visualization to interpret the data. In the first figure you see the distribution in pay gap worldwide. The average difference is about 20. You can also see that most countries have a gap between 11 and 28%. I think that is a lot! This is something I did not expect! 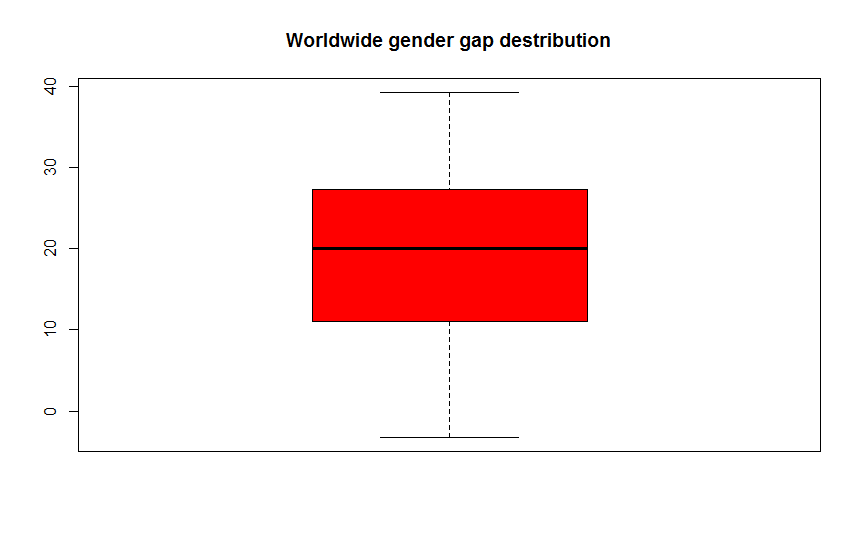 Gender pay gap does not only exist in my social environment but everywhere in the world. To illustrate the differences I created a map that shows the difference by country.

At first sight, I got what I expected. In what we call not so developed countries, pay gap is much higher than in the so-called developed countries. In India, you have a gap of 32.9 percent, in the USA you have only 17.4%. So it would be interesting to see how the biggest economies in world are doing. In the next figure you can see it. 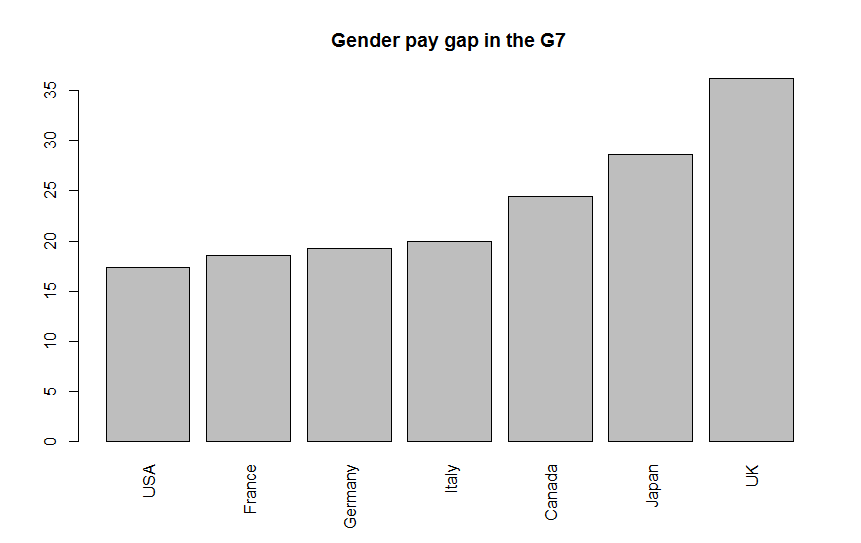 Seeing this, I was confused. Obviously, there is a big pay gap in the world biggest economies as well. Are you interested in seeing which countries perform best? As the next chart shows, the countries with the lowest pay gap are Philippines, Honduras and Algeria. In these countries women earn more than men do. Again, this is not what I expected at all. 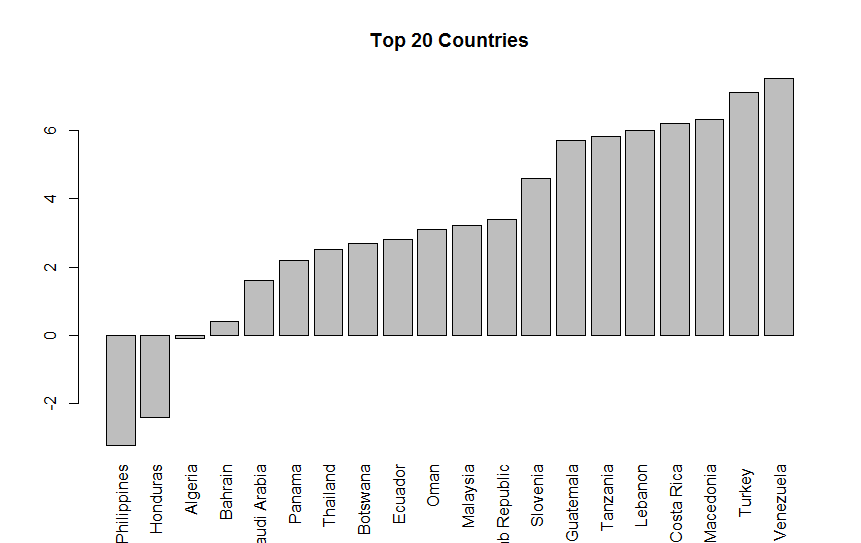 I would have expected that the leading world economies have the lowest pay gap. Are those countries doing better when it comes to gender equality? Maybe, or maybe there are just not many women working? I know that in countries like Saudi Arabia women are not allowed to drive so I assume that working as a woman is not very common there. Especially not in jobs that require high qualifications. Further, I would assume that working women are outstanding women from higher socio-economic backgrounds, who are very confident and, therefore, earn a lot of money. Much more than the average man there does.

For Turkey, also an Islamic country, I can provide more information because I used to work there for a few months. As I noticed, equality between women and men is more developed there. You have more women working in so-called men-dominated sectors like computer science. They retire early when they are in their 50s, so they can take care of their grandchildren and thereby enable their daughters to work. The care work is moved to the late life of the women. Women do not raise their children but their grandchildren, which is a totally different approach to homemaking than the one Western society offers.

These are only assumptions and personal experiences during my various travels. To be sure about this, I could gather more data and more analysis to find it out. However, this would not solve the problem. So, what are the reasons for gender pay gap in developed countries like Germany?

Many women work part time here to take care of the family. This means raising children, taking care of the elderly and doing almost all the housework.
In these hours of unpaid work, they cannot work on their education. When they are working part time, they are not even able to build up a career because for that, they have to be always available for their job and part time is not an option here.

Another problem is women’s choice of jobs. There are jobs which are traditionally chosen by women like childcare worker, hairdresser, nurse, office administrations, doctor’s assistant and many more. These jobs are mostly done part time and even if they are done full time, they are paid badly. Therefore, it is not an option when it comes to family issues that men and women reduce their hours and take care of the family together. The woman usually reduces work hours or even quits her job, the man will ask for a salary adjustment. The family income just stays the same more or less. Not many would consider that a woman loves her job, that it is a part of her identity and losing this means losing a part of her own identity.

My advice for a young woman who is currently defining her future is to look for a job that is well paid. Good candidates are those not many woman are working in, like engineering and computer science. In that world women are rare and they treat and pay you well. Do not expect to be paid as much as men though, because, you guessed it: you are a woman.

My second advice is to look for a partner who is a companion, not a breadwinner. If you are on the same level you can live, progress and decide at eye level. So as the doctor’s assistant do not look for the doctor but look for the equivalent of an assistant.

I followed my own advice. I am a computer scientist and married to a male computer scientist. Together, we build up our life. Together, we founded a small software company. He runs daily business and I work in the background. Next to this, I work as a team lead and project manager in the service department of a different international software vendor. With this approach, we were able to build the company and did not depend on the company earns. In the beginning, we used my salary for living and sometimes even more than this. It was a hard time and we had long discussions about how to run the company because we are able to discuss in equality. In the end, it was worth it. I have my own career in the software industry and he is running the company. We have always things to talk and dream about. We share the work in the household and when one day the time comes to take time for caring, we will and have to discuss who will do it and for how long. We cannot use the excuse of salary, we will have to make a decision.

Our way of living is not the easy way, but I recommend it wholeheartedly. You will fight more, you will be a strange exception in your environment and nothing is laid out for you. But then, you can define your own way. You can decide to care about the family in equality and work together on your plan of society. You will make a statement for the next generation in which it will hopefully be the case that women and men are paid equally for their work and family work, and caring men are not the exception but the standard.

Here you find a self assesemt of my non techncal skills

Find some of my presentations on SlideShare

END_OF_DOCUMENT_TOKEN_TO_BE_REPLACED

Find here some books I enjoyed recently and recommend to read.